Story: Nobody knows who the Pink Elephant is. There is no record of where it is from. Therefore, no-one has any clue about it.
However, it would appear in someone’s dream or spiritual journey to give a hint about what it truly means to “be”. Then he changed his previous way to “be”, his new self is inspirational, fun, and filled with wonder, as who he truly is.

There are no reviews yet.

Three metamorphoses of the spirit I named for you: how the spirit became a camel, and the camel a lion, and finally a child.

The Three Metamorphoses story was originally written by German philosopher Friedrich Nietzsche. He believed that the purpose of human existence is to achieve one's full potential. To achieve that, a spirit had to go through three transformations: a camel, a lion, and a child. These talismans are made of soft enamel. The set comes with three animals and each animal represents survival, freedom, and creation. Besides a beautiful, fun decoration, the talisman brings unique values to your life and your way of being. 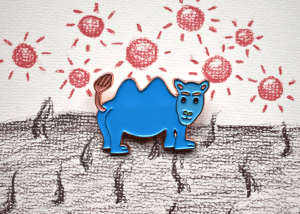 The camel is the weight-bearing spirit. It can carry great weight and survive in the desert. “To the spirit there is much that is heavy; to the strong, carrying spirit imbued with reverence. Its strength demands what is heavy and heaviest.” 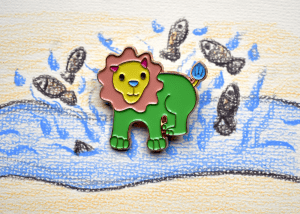 Then you become a lion, the ruler. “Here the spirit becomes lion, it wants to hunt down its freedom and be master in its own desert.” The lion is at the top of the food chain. It wins its game by breaking the rules dictated by a higher power, which Nietzsche called “the great dragon”. The dragon can represent anything that places commands on you. “Thou shalt” is the name of the great dragon. In modern English, it means “You shall”. After you conquer the great dragon, you won’t need to say “I will” any more. However, although a lion can create freedom for itself, it is still not capable of creating new values. 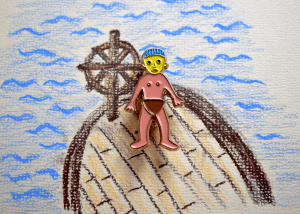 The spirit then transforms into a child, the creator. “The child is innocence and forgetting, a new beginning, a game, a wheel rolling out of itself, a first movement, a sacred yes-saying.” Adults can have a lot of structures in their heads which make them do things in certain ways because they have accepted the rules and values society regarded as legitmate. A child doesn’t know much of the world. It doesn’t care about how others perceive it and it can come up with things that are totally new. Picasso once said: “Every child is an artist. The problem is how to remain an artist after he grows up.”

Which of the three transformation stages are you in?

Fashion
£15.00
Lizard Story Lizard is considered holy and lucky in Hinduism tradition. Gigantic lizard installations settled on the ceiling in Varadharaja Perumal Temple. The lizard is supposed to wipe out all the accumulated disease if we touch it.
Add to wishlist
Add to cart
Quick view
Set your categories menu in Theme Settings -> Header -> Menu -> Mobile menu (categories)
Shopping cart
close